Hello, you are using an old browser that's unsafe and no longer supported. Please consider updating your browser to a newer version, or downloading a modern browser.

In Nepal, leaders of grantee organizations are breaking the silence about their experiences with child marriage, the suffering that results from harmful social norms, and the pressure girls experience in their communities. One of our grantee partners, Soiya Mahila Swabalambi Sanstha, have asked us to share the story of two women that are involved in their work. Their stories illustrate the courage, leadership, and strength that they now use to advocate for gender rights and greater opportunities for girls.

Mira comes from a family of seven children in which she is the first-born girl. Her family was poor and from a low caste Dalit community. To cover the costs of her education, Mira would help collect wood to sell for house construction. She would also work in the fields with her mother, making $0.40 a day and receiving a few kilograms of rice for her family.

Mira’s father was an alcoholic and abusive. He would hit Mira and her mother regularly. Whenever they were asked to carry water and they were delayed, he would hit them. Her father only hit her mother and sisters, never her brothers. She expressed that, “Maybe my father loved his daughters, but we never felt that.”

When she was 13, Mira heard her mother and father share their plan to marry her before she got her first period. Mira tried her best to hide her period, but her parents quickly found out because she did not have sanitary pads.

At the age of 14, Mira returned home from school on a Friday afternoon and took the buffalo to graze. When she returned, there were many people in her house discussing her marriage. Despite her efforts to convince her family otherwise, on Sunday at 9:00 am, the same people returned. Her father demanded that the people take her away within two hours, threatening that if Mira did not go with them he would kill himself. Mira did not know the groom and neither did her father. Her future husband was 30 years old.

When she found out that she was going to be married, she hid underneath a sack. Her younger sister showed the men where she was hiding because, had Mira not been found, her younger sister would have been married instead. They dressed Mira and forced her to get into the vehicle with the groom.

“Even when they sell a buffalo, they negotiate. But no one negotiated for me. I screamed in the vehicle as we drove through three villages, thinking someone would save me. But no one did.”

After their marriage, Mira’s husband took her to India to live at his godfather’s house because he did not have any family. There was nothing to eat during this time. When she became pregnant at 16 years old, she would lick a grinding stone to manage her hunger. Despite the physical abuse she suffered from her husband, Mira never left her husband because she did not have anywhere to go and had more freedom with her husband than with her father.

Due to escalating conflict with her husband’s godfather’s family, Mira took a NPR 700 ($7) loan. With this money, she and her husband returned to Nepal to stay in her mother’s house. However, when they arrived, the community questioned why they were staying in her mother’s house, as that is not the norm. Pushed by this community scrutiny, they decided to leave Nepal again and move to Chennai, India to find work.

In Chennai, Mira worked in a factory constructing packing boxes and her husband was a driver. They would only sleep for three hours. After three years working in these difficult circumstances, they returned to Nepal to her mother’s house.

After her brother was married, they needed to move out of her mother’s house, so she and her husband took an $8,000 USD loan and built a small brick home. Her husband has since migrated to Saudi Arabia for work and Mira continues to work in agriculture.

At this time, Mira was 29 years old. She heard about Nepal grantee Soiya Mahila Swabalambi Sanstha (Soiya) and wanted to join the organization so she could go back to school. She joined Soiya’s savings and credit group and was, eventually, elected as Vice President of the organization. Through the organization’s Girls First Fund project, she accompanied girls to a leadership “boot camp” in Kathmandu and during that time she shared this story for the first time. As a result, some girls have re-entered school.

Now Mira wants to ensure her sons get an education and would like to continue to be involved in leading Soiya. She enjoys going to the community and talking about the harms of child marriage. Mira wants to study and have a good job. When asked what she has learned personally in this Learning Year, Mira responds, “I realize the change in me. I used to be silent and shy and now I can speak.” 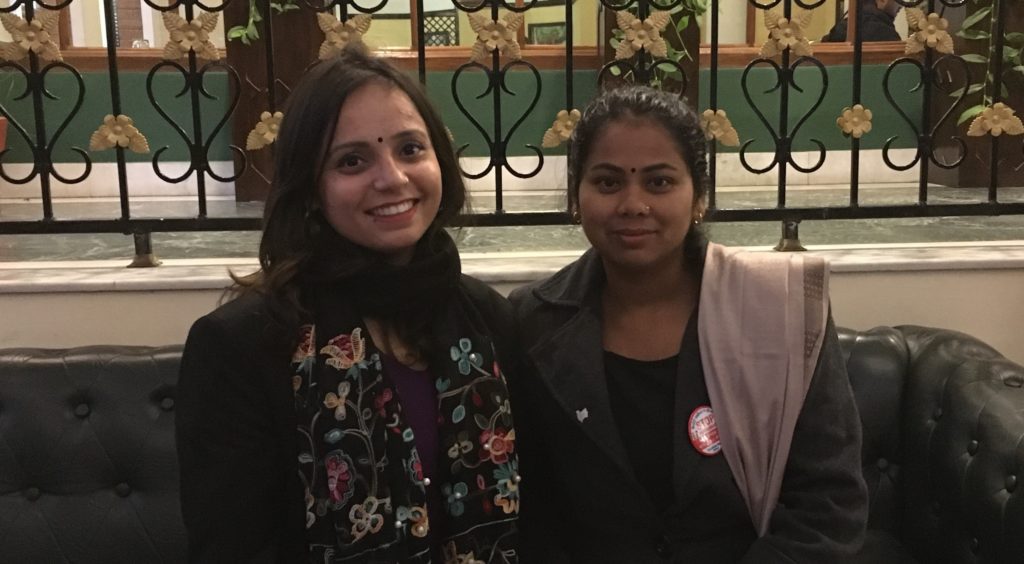 Rati and Mira, Project Coordinator and Vice President of Nepal grantee Soiya Mahila Swabalambi Sanstha encourage girls to consider alternatives to marriage based on their own experience

Rati was 17 years old and had just taken her class 10 examinations, hoping to become a nurse. During the three-month break while she waited for her examination results, Rati worked as a server in her mom’s restaurant. It was during this period that she met a bus driver who was from the next community over. He was 24 years old and they were attracted to one another.

One day, they met in the temple to talk. A friend soon interrupted, letting her know that her mom was looking for her. Given Nepali social norms, she knew that if she returned home she would be punished for being alone with a young man. So instead of returning home, Rati went to live with him and eventually married him.

Rati became dissatisfied living with her husband because he sexually abused her and would not allow her to go out of the small room they were renting. She was not allowed to speak with anyone else because he would become jealous. She was only able to watch TV during this time. She asked to return to school, but he refused. She would try to get books and hide them so she could continue her studies, but when her husband found the books, he would burn them.

After two years in this situation, she found out that her husband was also married to someone else and that was why he did not take her to his house. Around that same time, she had a son. She told her husband that she needed to go outside with her son, but he would not allow her to leave the house. When her son was one year old, she asked for a divorce, but he refused to divorce her.

During this time Rati was not in touch with her family because she knew she had disappointed and dishonored them by eloping with this man. When her son was three years old, her father called her to ask how she was doing. After her father’s call, she decided she needed to return to her parent’s house. She went to the police station and reported that she suffered from domestic violence and that her husband was married and did not tell her. Her husband was put in jail and Rati returned to her parent’s home.

After returning home, Rati came to know about the organization Soiya Mahila Swabalambi Sanstha (Soiya). She shared her story with Soiya and offered to be a volunteer for a year because she wanted to work with vulnerable individuals, feeling she could relate with them. After one year as a volunteer, Rati became a Project Coordinator and has now been in that role for 6 years. Her life is transformed and she said, “I am the happiest. No one is happier now than me.” She tells her story to help staff and others understand the challenges girls face due to social pressure, gender-based violence, and early pregnancy.

Her parents are supportive, proud of her, and love her. In Nepal, if a divorced woman lives in her parent’s house, the community is unkind to them; however, her parents encouraged her to stay with them and to study. Now she is in the third year of a bachelor’s program. In one year, she will graduate. Her son is staying with her husband’s sister and is the first in his class at school. She sees him during festival time. Rati is in no rush to be married again. She says that if she ever marries again it will be to an unmarried boy because she wants to model that a divorced woman can still choose whomever they would like to marry, contrary to social norms.

Rati knows her dignity and is helping others to embrace theirs.